Gunmen of the Apocalypse

The gang is attacked by a simulant ship who upgrade Starbug with laser cannons and defensive shields and then force them to play a game of 'cat and mouse'. The crew decide not to flee but to stay and fight which stuns the simulants. Before their ship is crippled by Starbugs new offensive weapons, the simulants upload a killer virus into the navicomp. Kryten then transfers the virus to his CPU in an attempt to eradicate it. The gang watch on a virtual reality screen as Kryten's search for an antidote is manifested as a western setting where Kryten is a sheriff who has to fight the four horsemen of the Apocalypse - Death, War, Pestilence and Famine. 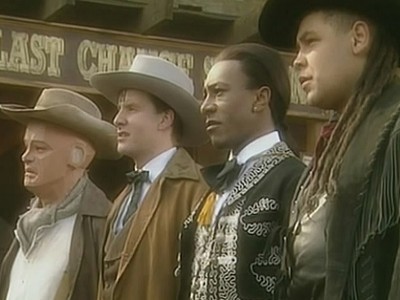