Event: GREECE 800 B.C. Sydney is grabbed by mysterious men, who lock a necklace on her. The next morning, under the influence of Carson Inez, she declares an indefinite leave of absence and departs for Greece with Inez. Karen and Nigel are shocked, and Nigel soon ascertains that the amulet has mind-control powers. He travels to Greece, where he finds that Sydney is willingly helping Carson to locate the tomb of Athena. Despite his best efforts, Sydney remains under Carson's thrall. Nigel is captured and reluctantly helps the two women. He later escapes, and Carson and Sydney make a try for the statue. Sydney realizes something is amiss and during moments of clarity manage to inscribe the incantation that binds the necklace wearer. Sent to kill Nigel, she manages to get it to him and he frees her. They capture Carson and avoid her men by putting her under the necklace's control. 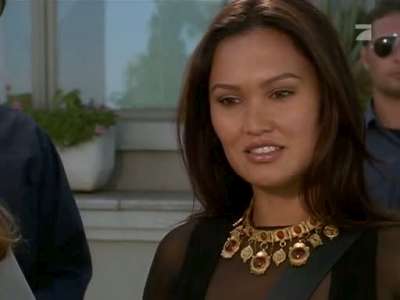