The army started to prepare themselves to fight Shougo and kill everyone else. Sanosuke continued to try and bring Magdaria to Elsten. After achieving many obstacles Sanosuke finds some luck and sees Elsten. Elsten was interfering too much so Santo tried to kill him but Magdaria jumped in and was shot. Sanosuke beat up Santo and returned Magdaria's medallion back to her, shortly after she died. Elsten left and tried to hurry and get to the holy hill to stop the fight. Meanwhile Kenshin finally arrived and tried to stop the fight, he had found Shougo and would fight him if he would force the children to sacrifice themselves. 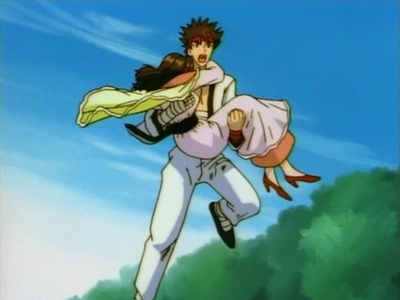