Jerry, George and Elaine return from their trip to India that they don't want to talk about. Sue Ellen calls the wedding off and Nina doesn't want George or Jerry. George finds out that Jerry slept with Nina and Elaine slept with the groom. Kramer and FDR settle their score, a snowball with something extra. Jerry "schnapps" Elaine to find out why George is so bitter with him. Kramer tries to out wish FDR. Elaine, Jerry, George and Nina arrive in India, where Elaine discovers that the groom is someone she slept with and that they are the only people from the U.S. who are attending the ceremony. Kramer is angry with Newman because he didn't use his birthday wish to save Kramer from FDR. George "schnapps" Elaine to find out the secret Elaine is keeping about Jerry and Nina. Elaine buys tickets to India to spite Sue Ellen by showing up at her wedding. Kramer tries to get Newman to use his birthday wish to protect Kramer from FDR. Elaine finds that Jerry and Nina have just slept together. Elaine meets the parents of Sue Ellen's fiancé who try to convince her not to go to India for the wedding; after all they aren't even going. Jerry and Nina suffer an awkward pause in their conversation. Kramer confronts FDR about his birthday wish. Elaine's mail from India is an "unvitation" to Sue Ellen's wedding in India to someone whose name seems familiar to her. George asks Jerry to call Nina about setting them up on a date and realizes he must where his Timberlands every time he sees her. Jerry and George are walking down the street and they run into Nina and old girlfriend of Jerry's whom he never slept with. Kramer attends FDR's birthday and FDR gives him an evil eye right before blowing out the candles on his cake. Elaine receives an item in the mail from India. Two years earlier, Jerry tells George and Susan that Nina might be the one; Kramer nails FDR in the back of the head with a snowball; Elaine is dating an Indian man named Peter (Pinter). Eleven years earlier, new resi 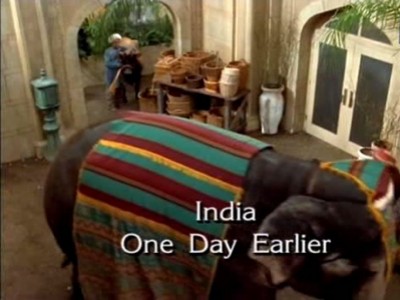