George tries to break up with his girlfriend, Maura, only she doesn't agree. Jerry has purchased cuff links worn by Jerry Lewis in Cinderfella. He plans to use them as a conversation starter with Lewis when he goes to an upcoming roast at the Friar's Club. Having the same first name isn't enough. A man of mystery that she has met intrigues Elaine. Jerry suggests that perhaps he is a super-hero. With robberies occurring in the building, Kramer has obtained a strongbox to hold his valuables. He needs to find a place to hide his key. A place that no one knows, except him. His first place doesn't work. George lays out all of the reasons that they should be officially broken up, Maura still doesn't agree "to turn the key." Elaine gives up on her mystery man when he runs from a woman that Elaine deduces is his wife. She returns to Jerry's apartment to find that his intercom is broken. So she shouts to him from the street, about the mystery man, while she waits for the opportunity to get into his building. Jerry inspects his intercom, only to find Kramer's strongbox key hidden inside. Kramer hides his key again. Jerry finds the key again and decides to go down to let George in. While downstairs, a neighbor who's forgotten his key and is unknown to Jerry asks to be let in. Jerry denies him entry. Elaine goes to the mystery man's shabby apartment and discovers he is poor and on welfare. The woman he ran from is his welfare caseworker. Jerry discovers the keyless neighbor, does in fact live in his building, on the 5th floor in apartment 5E (!) right next door to Kramer. Elaine tells Jerry about her mystery man's super powers. George decides that cheating on Maura might be his ticket out. Kramer lets Phil, Jerry's "new" neighbor, keep his parrot in the hallway. Kramer also hides his key at Phil's. Glenn, the mystery man, takes Elaine on a date in the alley. Jerry needs his cufflinks for the roast, only to find out that Kramer has locked them in his strongbox. The key to the s 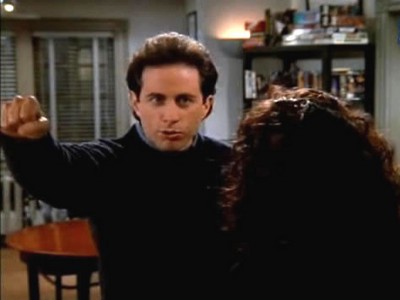