Elaine thinks that Puddy is religious because of the presets she discovers on his car radio. The first idea George presents at a Kruger project meeting goes over great, his follow up suggestion isn't as well received. Jerry suggests that George use the old showmanship trick of leaving on a high note. Elaine tells George and Jerry about her suspicions; George suggests that she reset his radio presets as a test. Kramer and Mickey get an acting gig playing sick for some medical students. Jerry's girlfriend, Sophie, calls him with the familiar "it's me" greeting only he doesn't recognize her voice. George leaves a Kruger meeting on a high note. For their acting job, Mickey gets bacterial meningitis and Kramer has gonorrhea. Elaine confirms that Puddy is religious. Kramer picks up on the showmanship idea and really plays up his gonorrhea part. Sophie leaves an "it's me" message on Jerry's answering machine. George suggest he call her back with the "it's me" greeting. Sophie doesn't recognize Jerry's voice and thinks he is someone else; Jerry discovers that she hasn't told him about the tractor story. Puddy doesn't have a problem with Elaine not being religious, after all he is not the one who's "going to hell." George and Jerry speculate on what the tractor story is. Elaine begins to worry about going to hell. Kruger throws everyone off the project because they are boring, so now George is the only other member of the project team. Kramer receives rave reviews for his portrayal of gonorrhea, but now he feels he has been typecast. Jerry sees a scar on Sophie's leg and assumes it was from a tractor accident. George finds that he has to do all the actual work on the project as Kruger keeps making excuses and doesn't do any actual work. Puddy wants Elaine to steal a paper, after all she is already going to hell and he doesn't seem to care. Kramer takes Mickey's ailment. Elaine and Puddy seek the advice of a priest about where their relationship is going. Sophie tries to tel 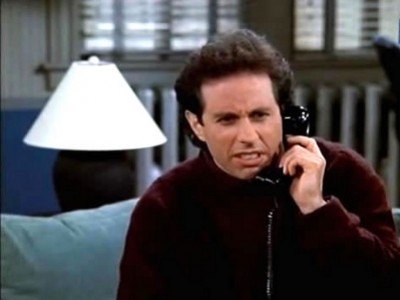