Voyage To The Planets (1)

The interplanetary spacecraft Pegasus and her five-strong crew are launched into Earth orbit. Their epic six-year mission has begun. Forty one days from Earth lies their first encounter - with Venus. Although Earth's nearest neighbour, it could not be a more different world. With clouds of sulphuric acid, surface temperatures pushing 500 degrees centigrade, snows of metal encrusting mountain peaks and atmospheric pressures that could destroy a submarine, this is a hell-hole of a planet. Astronauts Zoe Lessard and Yvan Grigorev make the nail-biting descent in a landing craft called Orpheus. 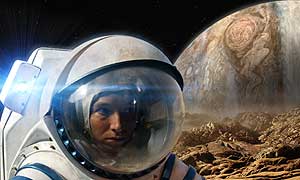