Archer and the crew are disappointed to discover that T'Pol has been ordered by the Vulcan High Command to leave Enterprise -and equally frustrated at her seeming indifference to leaving their ranks. T'Pol's last mission as a Starfleet officer, however, proves eventful when she and Archer are kidnapped by a militant faction on an alien planet. However, aid comes to them in the form of the Andorians: their leader, Shran, still owes Archer a debt (from the events of "The Andorian Incident"). It turns out the Vulcans are covertly backing the ruling faction on the planet, while the Andorians are aiding the freedom fighters. With the help of the Andorians, Malcolm and Trip rescue Archer and T'Pol over the objections of the local Vulcan ship, and Shran considers his debt to Archer repaid. 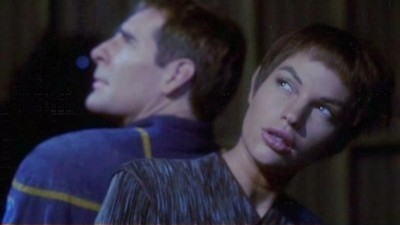