The boys are ready for a day at the amusement park, but just as ready to go it starts to rain. Initially distraught, David has the idea that their apartment could be a amusement park. For example, the couch could be a roller-coaster! However things soon degenerate the and the boys start arguing. The girls from the apartment downstairs visit the boys to see what all the commotion is about. When they discover the boys have been fighting again, they suggest they should see a therapist. The boys visit the therapist, Dr. Hirschorn, but soon start arguing again and are committed! In the mental institute Dr Hirschorn tries different methods to help the boys be friends again, but nothing works. Eventually, Dr Hirschorn decides that as a last resort the boys should all get lobotomies. While strapped in for surgery the boys, terrified, all confess that they're all best friends. The surgery suddenly stops, and the surgeons reveal themselves as...the female roommates! It turns out that everything from first meeting Dr. Hirschorn onwards has been staged, as part of the "Amusement Park of the Mind." And the person behind all this? No other than Justin Lord, who’s past appearances in previous Stella episodes were actually Justin monitoring the boys behavior! The boys, friends again, celebrate with a dance. 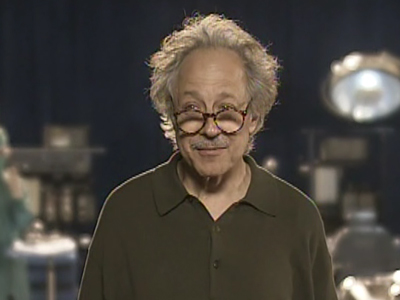