Tarzan and the City of Gold

Upon saving a woman named Thia from the Bulgani gorilla tribe, Tarzan learns that she is from Athne the City of Ivory and had been chased away by enemy soldiers from Zandor the City of Gold. While helping Thia back to Athne, Tarzan ends up captured by the Zandorians. While imprisoned, Tarzan meets his cellmate Phobeg who tells him of Queen Nemone who has the two of them fight in the arena. Once Fobeg is freed, Tarzan ends up incarcerated with Thia after harming her prime minister Tomos. However, Fobeg has a plan to free Tarzan and Thia. 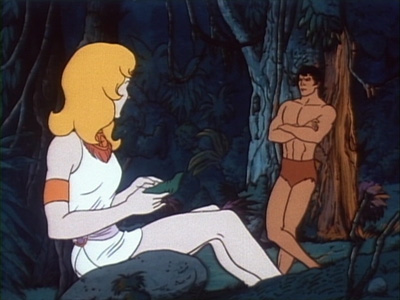