Teen actress Nicky Logan arrives at Bayside High School to shoot a new movie. But when Raven had a vision that Nicky gonna get choked by eating taffy, she saves her from it. She asks Raven how does she know this will occurs, but when she said she is a psychic, Nicky had confessed that she's playing the psychic character in a new movie and asks that if Raven would mind to be one of Nicky's pointers. Raven would be happy to help, if means joining Nicky's circle. She acts like a psychic that talks to the dead. Then Raven brainwashes Nicky. But then she had a vision that this will cause Nicky to be fired on the set. Nicky said that if her performance had met with positive reviews, she'll allows Raven to come along to Malibu, but Raven was worried about her vision and she started planning how to save Nicky from be fired. She tells her on the set but it turns out that Raven is gonna get fired. She tries to explain to Nicky but she doesn't care and she said that Raven can't come along to Malibu, leaving Raven heartbroken. Then Raven had the third vision that Nicky's performance will be meeting negative reviews and the news anchor announces that her beach house in Malibu will be taken away. Since Raven thinks Nicky deserves it, she didn't tell her. 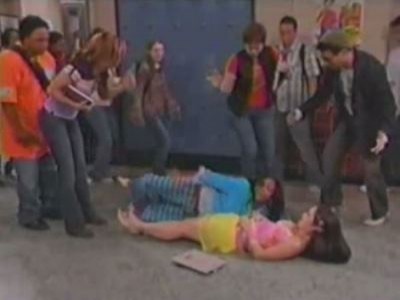