Ben continues building a persistence of vision display. In the previous episode, he designed and stuffed PCBs with LEDS and constant current LED drivers. After he tested his LED panel, he began his designs for the rotating rig that will hold it. Now he can begin laser-cutting and routing out the pieces that will make the mechanical rig work. He etches a copper disc that works carbon brushes, assembles the gear mech, installs and opto-interrupter, and does some tests. He has an unexpected problem. 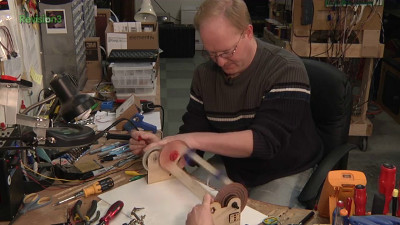