The Truth Will Reveal Itself

Whitney meets for lunch with Alex, a model who she had previously gone on a date with during one of her trips east with People's Revolution. Hills fans will remember that the second time she saw Alex, after a fashion show they worked together before her move, she blew him off for Jay, who she's been with ever since. Whitney apologizes to Alex for leaving him that night and tells him that she's been seeing Jay. Alex admits that while he was a bit hurt, that's not why he's invited Whitney out for lunch. He goes on to tell her that his roommate is friends with Jay's ex-girlfriend, Danielle. According to what Alex has heard, Jay recently told Danielle that he wasn't seeing Whitney anymore and that the exes spent the night together. Whitney is visibly upset by the story, but tells Alex that she has to decide who she's going to trust. Back at Erin's apartment, Whitney recaps what Alex told her. She tells Erin that the story made her heart sink to her stomach and that she isn't sure who to trust. Whitney decides she's going to talk to Jay about it and let him know that she may be new to the city, but that she's not that naïve. While playing basketball in Central Park, Adam asks Jay whether he plans to stop seeing other people as things get more serious with Whitney. They discuss timing for such a conversation and agree that neither would want to be the one in the relationship to bring it up. When Olivia goes out to dinner with her cousin, Nevan, they discuss Whitney, who Nevan advises Olivia to take her under her wing. Olivia concurs and tells him that she'll bring Whitney with her to the Manolo Blahnik event she's attending at Bergdorf Goodman. Whitney meets up with Jay at Café Noir to discuss the story he heard from Alex at lunch. Jay explains his side of the story: Danielle approached him to talk and that he got a cab home for her, not that he went home with her. He swears to Whitney that he's telling the truth and even offers to call Danielle to confir 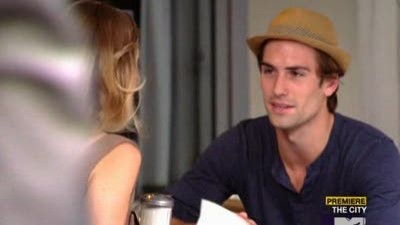