Erin's new boyfriend, Duncan, flies into town from Toronto. They playfully flirt on the couch at Erin's apartment when Whitney walks in. After a brief introduction, Whitney tells them that she will give the two alone time and gets out of their way. Erin and Whitney grab breakfast at The Smith in the East Village while Duncan is asleep. Whitney shares that she is grateful yet apologetic that Erin has let her stay in her apartment. Erin responds that she is happy to open up her home, even though it might be a little crowded with Duncan in town. Whitney also questions her relationship with Jay -- she wants to trust him, but is finding it difficult. Whitney and Olivia help out with the styling at a Diane von Furstenberg photo shoot. While on the job, Whitney gets a call from Jay about an apartment he wants her to see immediately. She tells Olivia she wants to check out the place, but doesn't want to leave the shoot. Olivia, a native New Yorker, offers to help Whitney apartment hunt later but Whitney decides to leave early and goes to meet up with Jay. Whitney and Jay check out the apartment in Gramercy Park, only 2 blocks away from Erin's place. They are both pleasantly surprised with the open floor plan and the breathtaking floor-to-ceiling windows. Although Whitney, at first, has some reservations about the high-rise building, Jay reassures her that with a new place they can finally have some alone time. Later, Whitney is elated to tell Olivia that she got the apartment she saw with Jay. Now feeling like she's on top of the world, Olivia shakes up her spirits with a little unwelcomed advice: you need to be more independent and your own person. Erin and Duncan spend the night out at Brass Monkey. Although a bit hesitant at first, Erin opens up her feelings to Duncan and he warmly reciprocates. She flirtatiously asks him how he can be so perfect, but Duncan responds that he definitely has his secrets. Whitney moves into her new apartment with Jay and E 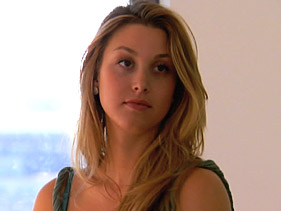