Jay and Whitney have dinner plans with Adam and Allie. While Whitney and Jay wait for them at the restaurant, Jay briefs her on Adam and Allie's relationship and how instantly they had a spark. He also tells her that Allie is originally from Sacramento. Whitney finds comfort in Allie being a fellow Cali girl. When Adam and Allie arrive at the restaurant, Allie talks about how demanding her modeling career is and that she has to travel tomorrow for a Diesel photo shoot. Allie asks Whitney if she would keep an eye on Adam while she's away. Whitney and Erin take a stroll in Central Park. They discuss Adam and Erin's relationship. Erin is concerned that Adam might misbehave while Allie's away. Whitney thinks that although Allie has asked her to keep an eye on Adam, she doesn't want to be in the middle of their relationship and feels torn. Olivia and Nevan go to the Mike Weiss Art Gallery in Chelsea. Nevan expresses that he needs to find a stable job that will give him a balanced day-to-day routine. He contemplates getting a nightclub job in the East Village but realizes that his social lifestyle may not be conducive to such a job. He's realizing that he had a pretty cushy life with all of his finances being taken care of, but Olivia reassures him that the lifestyle will come back if he just gets a job! Jay, Adam and their entourage head out to Cain nightclub for a boys' night out. Jay admits that they could really get in to some trouble. Shortly after, Samantha and her friend Catarina join the boys. After some casual flirtations exchanged between Adam and Catarina, Jay suspects that there might be some repercussions from tonight's festivities. The following morning, Whitney, Erin and Sami meet up for brunch at Lyric Diner in Gramercy. Sami gives the ladies the scoop on what happened the night before at Cain. From what she heard, the party continued on at Adam and Jay's apartment until 8 in the morning. Suddenly, Sami gets a text from a friend saying that Ada 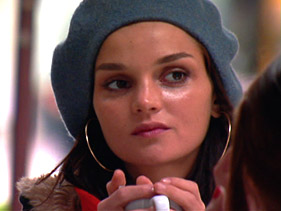