Still trying to reconnect with Shelly, Draven visits her gravesite only to stumble upon the ghost of a young boy who (apparently) only he can see. The six-year old ghost, Casey Thompson (Jared Zabel) is lonely, and worried about his stunt motorcyclist father, Jake Thompson (John Hawkes), whom he believes will die soon. Jake, ""the World's Greatest Daredevil"" plans to jump 300 feet, over 30 cars, as part of a pay-for-view television event set up by shady promoter Royal Boyd (Jason Shombing). When contacted by Draven, Jake refuses to believe that his son is desperately trying to send him a message. When Jake's stunt mechanic dies in a freak bike explosion, Draven feels compelled to intervene, despite the fact that Detective Albrecht and his uncomfortably inquisitive new partner Jessica Capshaw (Christina Cox) have been assigned the case. Draven finally persuades Jake to let him do the jump instead, since he cannot die, and they exchange talismans, but things go wrong when Draven is kidnap 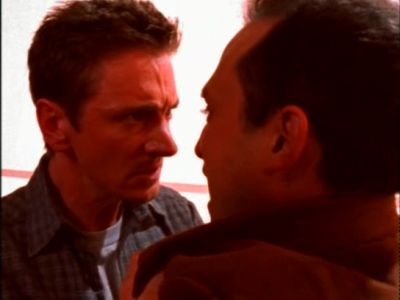