Shea's abusive mobster husband turns up and Draven tries to help her but in doing so exposes himself to the Police Internal Affairs Department who are already investigating Albrecht. Strange tales have been coming out of Port Columbia's criminal underbelly and Lieutenant Morgan Fine (Tim Kelleher) from Internal Affairs is sent in to investigate. He is suspicious of Albrecht's secretive work habits, mysterious sources, and sudden rise in arrest success rates, so he leans on Jessica to determine if her partner is a dirty cop. Meanwhile, the Blackout is running smoothly with Shea (Gaetana Korbin) as the new manager but when her mobster husband, Frank Moran (Kavan Smith), turns up, having bought the place, it is obvious that he is determined to get his wife back, by force if necessary. Draven turns to Albrecht for background on Moran and when he learns that the man is corrupt and ruthless with judges and cops on his payroll, he realizes the only way to protect Shea is to put Moran behind b 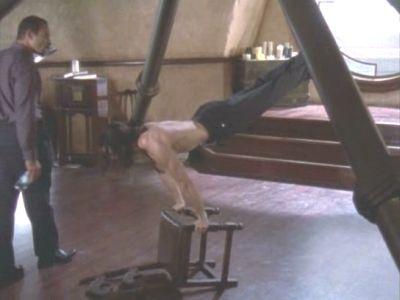