A shadowy group of powerful men approach Draven with an offer he can't refuse - to reunite him with Shelly forever. Dr. Dorsett (Don Most) seeks Draven out, carrying an unusual offer from the Lazarus Group. This secretive consortium of powerful men smoothed the way for Dorsett's therapy license to be re-instated and he owes them a favor. They claim to posses advanced technology which will reunite Draven with Shelly and want to test it on Draven. Unbeknownst to him, the Lazarus Group is a secret society rumored to have been in existence since the time of the Druids, and their interest in him is anything but benevolent. The society is dominated by the physically frail but still intimidating Frederick Balsam (Mavor Moore) who holds sway not only over Judge Morrison (Jerry Wasserman), who unexpectedly released Draven from jail, but also over head scientist Dr. Jack Saks (Robert Wisden), and group member Steve Fentress (Terry David Mulligan). Draven agrees to the experiment, but once hooked 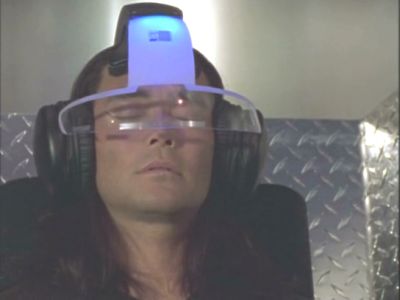