The leader of the Lazarus Group plans to subvert The Crow into his henchman and destroy Eric Draven. Shelly briefly becomes human to save him but is unable to prevent Draven and the evil Crow from a battle of apocalypse ferocity. Frederick Balsam (Mavor Moore), the ailing leader of the mysterious Lazarus Group has successfully transferred his soul into the body of his former personal trainer James Horton (Michael Weatherly). Now young, virile and still pure evil, he has destroyed the body jump technology and is systematically eliminating anyone who knows about it. Part of his master plan is to turn The Crow into his one-man private army and destroy Draven. Meanwhile, Detective Albrecht is assigned to find out who vandalized Draven's grave, covering it in blood. In the cemetery he is approached by an extremely nervous Judge Morrison (Jerry Wasserman) -- a former member of the Lazarus Group who did all their judicial dirty work. He now demands police protection in exchange for informatio 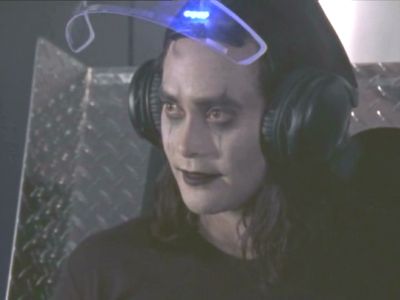