Con Marlowe makes a violent escape from a work-gang at the Arizona Territorial Prison. He heads for Silver City where his wife, Peg, awaits him and where he can find Marshal Lamson, the man he blames for sending him to prison. During an encounter between the two in Peg's hotel room, Marlowe strikes a match to light a cigar and Lamson, thinking Marlowe's drawing his gun, shoots him dead. The bullet strikes Marlowe in the back and when word of this spreads, townspeople turn against Lamson. Marlowe's widow vows to avenge her husband and sends for two gunfighters, Fred Sooley and Len Harbin. Sooley figures this isn't his fight and leaves town but Harbin challenges Lamson in the hotel dining room. Deputy McCord arrives on the scene, Harbin draws his gun to shoot Lamson, and McCord shoots Harbin dead, the bullet entering the gunfighter's back. The townspeople in the dining room agree McCord's actions were justified and McCord uses this incident to prompt the townspeople to reexamine their at 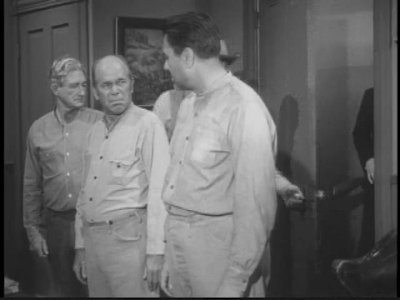