The third-season opener picks up where the sophomore year ended, with Mannion struggling for his life after being shot on his boat and falling overboard into the Potomac River. As he tries to pull himself ashore, his would-be assassin â€” the daughter of a Russian mobster â€” flees the scene and is hit by a car. While the accident brings to light the fact that Mannion is missing, the chief keeps his survival a secret so he can figure out who's behind the shooting. Deputy chief Noland is immediately pressured to solve the case by an aggressive U.S. attorney general, while a new press secretary tries to keep matters from spinning out of control. 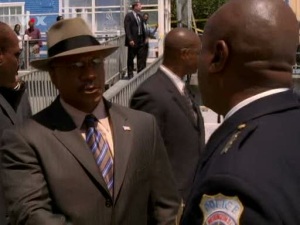