Winfred-Louder's attorneys try to force Drew to settle the lawsuit and sign a waiver absolving the store of any responsibility for his actions. He refuses to do this, and insists that he will find another lawyer. He coaxes Kate into calling an obnoxious ex-boyfriend and asking him to represent Drew at a discount rate. She agrees to go out with the guy, but calls it off after he makes a disgusting pass at her. Drew cannot afford anyone else, and is turned down by legal aid because he isn't quite poor enough to fall within their standards. The store has workmen cover Drew's cubicle with a tarp so that no one can see the cartoon, which he has posted on his wall. When the store attorneys again approach him about the settlement, Drew announces that he will represent himself. Oswald takes a liking to Drew's lecherous neighbor, Peaches. She quickly decides to dump Oswald because she doesn't see him as long-term relationship material. She leaves a note with Drew, who instead tells Osw 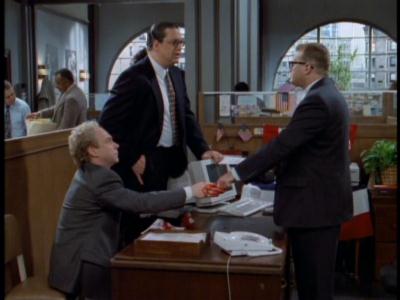