Only In Monroe --- July 2015 Colbert hosted Only in Monroe, which airs in the community of about 21,000 people. He talked with Detroit native Eminem in a lengthy segment, calling him by his given name, Marshall Mathers. Stephen Colbert to replace David Letterman as The Late Show host Colbert also chatted with the show's regular hosts, challenging one to a nail-painting race. The Detroit Free Press reports the 41-minute episode was filmed Tuesday. It premiered at midnight Wednesday and was later posted on YouTube. Program director Lance Sottile tells the newspaper they were "really happy" Colbert could fill in for the regular hosts. Colbert is stepping into CBS' late-night slot long occupied by David Letterman after hosting The Colbert Report on Comedy Central. 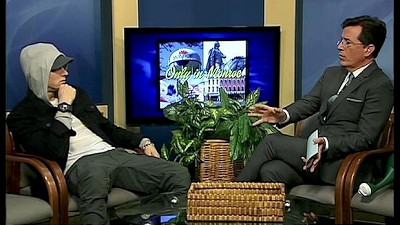