For the last six years, there has been a succession of roadworks on this stretch of the motorway resulting in a string of complaints from Jim who has the Highways Agency number permanently 'logged in his phone'. With the latest roadworks again scheduled during the night when the motorway is at its quietest, Jim knows what to expect - 'you start seeing orange lights flashing and at 3 and 4 in the morning it's disco time'. For Alan, the noise of the roadworks outside his home is 'like a war game' and he ponders whether his next move is to call the 24-hour hotline or email his local MP. A few doors down, Jim has armed himself with a decibel meter to record the sound levels in the hope that someone will realise how 'unbearable' the disruption is. Meanwhile, Jim and Alan are not the only ones having sleepless nights as the safety inspectors working the graveyard shift go on the lookout for heavy-freight truckers breaking the rules and a team of workers carry out the repairs to a four-mile stretch of the M6. 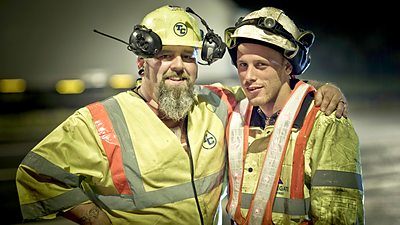