Clockmaker Steve Fletcher turns his talents to restoring an ornate antique pipe, carved from a mineral called meerschaum. Steve also calls on the help of his sister, and master saddle maker, Suzie to replace the lacklustre leather parts of the pipe. Gramophone guru Tim Weeks takes on the restoration of an early twentieth-century record player and radio that was bought at an auction by owner Corrie when she was just five but hasn't produced any music for years. And ceramics restorer Kirsten Ramsay tackles one of the largest pieces she's ever worked on, a huge blue pitcher from Germany decorated with images from an infamous event in Roman history. 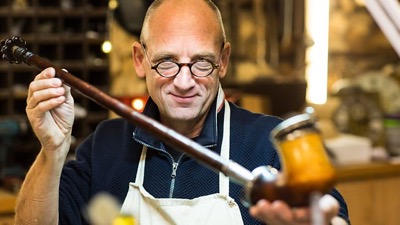