The Way We Weren't

Homer and Bart get into a fight over using a beer bottle to kiss girls which land them in Simpson family court, where Lisa presides as judge. While giving testimony Marge tells the kids that Homer's first kiss was with her in high school. He confesses that it wasn't his first kiss. Back when he was ten he went to camp See-A-Tree (for underprivileged boys). Here he meets Lenny, Carl and Moe. The boys go to the girl's camp where they work in the kitchen. After Homer returns the retainer to the girl who lost it he gets the opportunity to meet her later that night. He tells the kids she was the prettiest girl he'd ever seen, until he later met their mother. Marge reveals that the girl was her. Marge tells the story from her perspective. At the girls camp, Land-A-Man, we find Marge, Patty, Selma, Helen (Lovejoy), Cookie Kwan. When she met Homer that it was she who first kisses him and then they have the perfect kiss. They agree to meet again the following night, but Homer doesn't show. Marge says it was years before she could trust another boy. Homer explains why he didn't return for a second date. After he left her he fell off a cliff into the lake and drifted to the shores of "Camp Flab-Away," which featured Quimby, Wiggum and Comic Book Guy as some of the overweight campers. Homer manages to escape and gets to Marge's camp, but arrives after she's left. Now that Marge knows the truth Homer hopes for her forgiveness. She doesn't believe he really cared all those years ago, until he pulls the other piece of her broken heart out of his memory box. 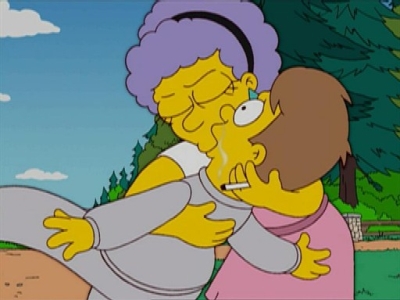