The Tick and Arthur run into Fiery Flame and his sidekick, Friendly Fire. Arthur is shocked to see how badly Fiery treats Friendly. Friendly is also surprised to see that The Tick doesn't treat Arthur like his maid. After a little chat with Arthur, Friendly leaves Fiery, and temporarily moves in with Arthur and Tick. Arthur and Tick are having enough problems of their own (the toothpaste cap, for example) and Friendly suggests Arthur put his foot down regarding his relationship with The Tick. Friendly takes him out to meet other underestimated sidekicks, but Arthur insists he's not a sidekick; he's part of a duo. Finally, Fiery shows up drunk asking for Friendly to go back to him, and Tick and Arthur establish that no one wears the pants in their house. Meanwhile, Captain Liberty attempts to find a companion. She tries to buy a Chow puppy, but the store clerk won't sell it to her, so she asks Batmanuel to buy for her. He buys a bulldog, which not only destroys her house, but also has 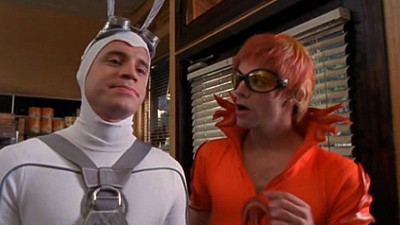