Mulder and Scully watch a movie with themselves as characters and are thoroughly disgusted at how they and their case are portrayed on the big screen. They recount how 18 months earlier they were followed around by a Hollywood producer while investigating a case concerning The Lazarus Bowl—a mythical piece of pottery reputed to have inscribed on it the words that Jesus Christ spoke when he raised Lazarus from the dead. 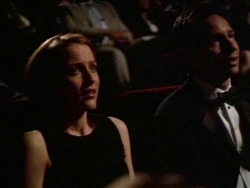