CAPSULE: Elliot gets a chance to direct a public service announcement, but is he capable of doing the job? Ellyn comes to DAA with a request for them to film a public service announcement for the city's new promotional campaign. Elliot pleads with Michael to give him the job of directing it, and Mike agrees. At a meeting with City Hall officials, Elliot's presentation strikes many of them as too far-out, but Michael assures Ellyn things will be OK. Elliot impresses Mike by obtaining the services of the well-known actor Ron DeLisle, a Philadelphia native, for $7500, but one of the City Hall people complains to Miles about a lack of confidence in Elliot. Miles reminds Michael that this project is his responsibility. Ellyn confides in Mike that she thinks the upcoming shoot looks like a ""train wreck."" Michael reassures her, but alone, he repeats her assessment: it's a train wreck. Even Nancy is getting apprehensive about Elliot's ability to do the job. The night before shooting starts, Et 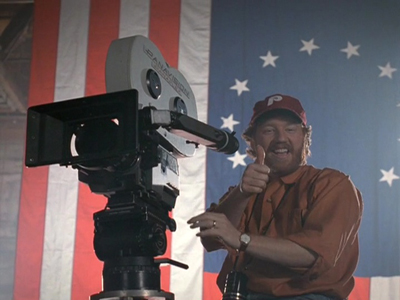