Prelude to a Bris

CAPSULE: The decision whether or not to circumcise the newborn Leo brings up larger questions: is he Jewish and what does that mean? Hope gives birth to her and Michael's new son Leo. After bringing the baby home, Michael tells Hope they must decide about a bris. Michael's mother Barbara arrives with her ""friend,"" Ben Titleman. Hope likes him, but Michael finds the situation of another man with his mother makes him uncomfortable. Before long both Ben and Melissa are asking about a mohel to perform the bris. Michael and Hope talk with Gary and Ellyn, respectively, about problems including the circumcision, which Michael is leaning toward and Hope against. That night when Michael brings up the subject, Hope wants him to explain it, why it's necessary and why he wants it done. Melissa drops by DAA with some pictures of Leo and some old relatives of the Steadman family. There's a surprise visitor, also: Rabbi Franklin, a mohel who assumes he is doing a job for Michael. He says Ben contacte 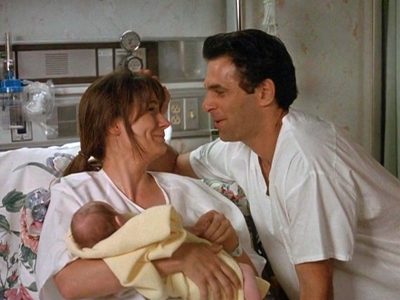