CAPSULE: Melissa starts a fledgling relationship with Miles. Ellyn and Jeffrey look for a new apartment. Melissa gets a job photographing five notable Philadelphians for a magazine. She's a bit apprehensive, though, when she finds out that one of her subjects is Miles Drentell. As an interviewer from the magazine questions an expansive Miles, Melissa does her job. After the session, Miles and Melissa talk and there seems to be some surprising attraction. He asks to see her portfolio--over dinner. Elsewhere, Ellyn and Richard are rushing around, late for work. To Ellyn's surprise, Jeffrey agrees to her suggestion that they find a new place to live together. Ellyn tells Michael she's not going out with Miles, but she does. At the restaurant things are awkward at first, but soon Melissa relaxes. She begins to talk about Michael and herself when they were younger, then catches herself. She tells him he's not what she expected. Later at DAA, Michael thinks that Miles let him take the rap fo 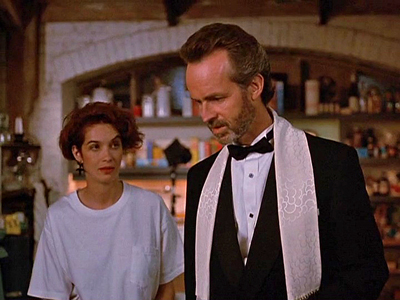