The Haunting of DAA

CAPSULE: Amidst a big company layoff, Michael is visited by a mystery man. It's Halloween time and Ethan is fighting with his mother. He wants to be Freddy Krueger; Nancy says no. At DAA Michael comes into Miles' office and finds him lying on the floor to relieve back pain. In the office is the original 3-D nodel of DAA. Miles tells Michael he's in the office that used to belong to co-founder Duncan Arthur, who died there of a heart attack. He also tells Michael that a 10% reduction in the work force is needed and that it's his job to fire the people. Michael tells Elliot, who refuses to give him any input once he hears that Hollis and Angel are on the list. Working late that evening, Michael hears a squeaking noise. It's the janitor pushing his bucket. Melissa is at DAA working with Elliot when Miles comes in the office. She's a bit frosty to him. Michael shows Elliot the list of layoffs. Hoillis is on it, but Angel is not. The door to Michael bathroom opens eerily, by itself. Michael 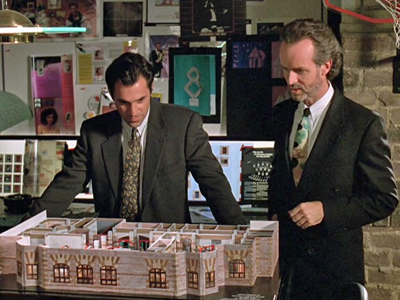