The sequel to the first season's Christmas episode "Fear Not", "The Feather" continues the story of a littles church's congregation now that they've seen Monica reveal herself in all her glory. Awed, trying to figure out what it all means, the congregation susceptible to Charles, a con artist posing as a preacher. He seizes a feather which fell from Monica's dove and holds it up the church as physical proof of the miracle. He's diverting piles of donation offerings into his own pockets when he's confronted by Wayne, who turns out to be his brother. Years ago, Charles and Wayne ran the preacher scam together, Wayne is now a reformed man and he's determined to stop him. The issue is brought to a head when Joey, who's been ministering to a crack baby that was left in the church, brings the infant to Charles for healing, he can't do it, of course, but Monica reveals herself again and reminds the church that they worshipped a feather instead of a King and their need for fame deafened 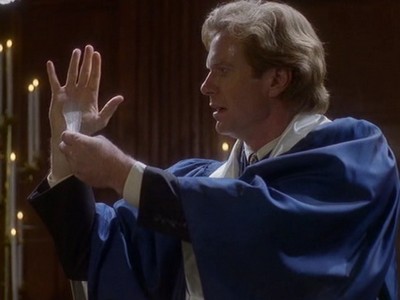