The Final Showdown on Earth (1)

At a speech on earth, something emerges from under the ground - a huge rocket, along with the Destron clones, who send a satellite into orbit. Meanwhile, Predaking and Bruticus begin attacking cruise ships in the ocean. Spike and Carly start to organize teams to repel the Destrons - the Protectobots, the Throttlebots and the clones. The Cybertron Headmasters and Targetmaster hasten their journey back toward Earth in Fortress Maximus - with Sixshot getting a free lift - after getting a report from Metroplex. Defensor battles Bruticus as the Throttlebots face Predaking. The Targetmasters try to determine what the giant metal pillar, which popped out of the ground, is used for, and they see it emitting a large amount of electrical energy. The Trainbots reunite Daniel with his parents, who are trying to rescue some people trapped in a crevice. The bands of electrical energy released by the pillars stretch across the world, causing massive destruction. Sixshot confronts the Destron clones 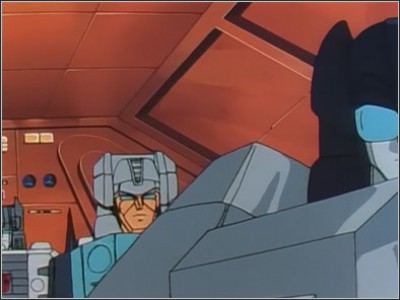