What to Do with Vallery When You're Dead

Victor Balick, a media mogul, is targeting Arnie Feign. Arnie is an Internet author who plans to release a tell all expose exposing Victor Balick who's real name is Ileat Petrovski. Petrovski is actually a cold-blooded killer. Arnie hires V.I.P. to protect him but at the same time Victor Balick is trying to hire V.I.P. to protect him. Why? Who Knows? The V.I.P. team goes to Arnie's place but he doesn't trust them, he thinks they're working for Balick behind his back. Vallery convinces him that they're not. Just then some of Balick's men open fire on them, they retaliate making it seem like there's more of them than there actually is. After this is all over they're back at V.I.P. headquarters discussing a payment plan. Arnie is going to make them a press kit instead of paying them. Just when Arnie thinks he's safe Balick pops out of the trunk of Arnie's car commanding him at gunpoint to get in the trunk and tells Val to drive. Luckily for Val he didn't wear his seat belt so she just ope 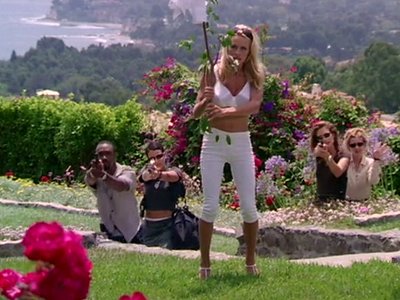