Three Days to a Kill

Kay's boyfriend from college escapes a mob hit and comes to L.A. Once in L.A. Val and Kay go to pick him at the airport. At the airport though Kay is mistaken to be Romona Flynn, a professional hit woman, by the guys who want her boyfriend dead. Her cover is blown however when the real Romona Flynn arrives. Val, Kay and Stu (Kay's boyfriend) escape but Romona follows them on her motorcycle. The car that Val was driving suddenly stops and Val manages to make Romona fall off her motorcycle. Kay learns that her boyfriend is a cheater and she sends him to Alaska, then she starts to date one of the guys who wanted her boyfriend dead. 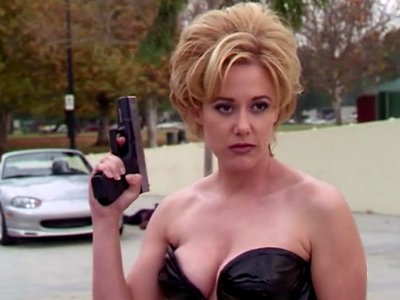