There is a little boy on the wagon train named Bobby who worships his father, John Darro. Darro was badly injured during the civil war and now walks with a limp. To his son, this is as good as a medal as regards a testament to his father's bravery, and young Bobby makes sure everyone on the train knows how proud he is of his Pa. Then Major Adams sees an old man sitting out alone on the prairie. He seems the worse for drink but the Major won't leave him there to rot and takes him along. He too can tell a tale- of an Indian massacre of a wagon train and a coward who ran. He knew John Darro, but by another name. Suddenly Darro finds he must prove himself all over again. To the stranger, the Major, the people on the train, but most of all to his son. 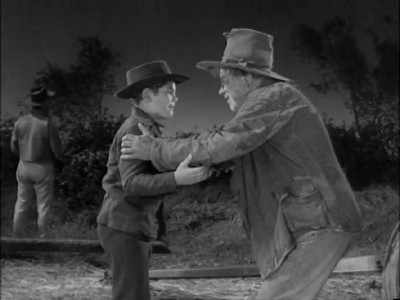