Venusians disguised as gorgeous babes plot to plunder Earth of its riches in an uproarious episode that climaxes at Super Bowl XXXII in San Diego. When hordes of beautiful women start showing up in sleepy Rutherford, Ohio -- and seem enthusiastic about dating average Joes like Dick, Harry, Tommy, and Officer Don - Sally suspects that something's amiss. Before she can warn anyone that the women are really Venusians bent on dominating Earth, they discover her and force her to become one of them. The Solomon men embark on a country-wide search for Sally that ends at the Super Bowl, where the lethal lovelies have planned to unleash their most devastating weapon yet -- the ultimate beer commercial, designed to enslave mankind into coughing up the rest of their pricey consumer goods. In the supervixens' lair, the Solomon men seem defeated, but with the help of Sally, who only pretended to turn against them, and Venusian Mascha [ Cindy Crawford ], who's been won over by Harry's simple charms, 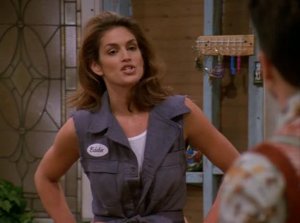