The Moonlit Girl Gives off a Secret Scent

While running home late from a job, Ichigo encounters a supposed vampire, who runs off when she sees a pin Otome gave her. This vampire is revealed to be Otome's classmate, Yurika Tōdō, who constantly acts in character in preparation for a Loli-Goth themed audition for a rock festival, which Ichigo also intends to participate in. Feeling she needs to make a character for herself too, Ichigo starts dressing up like Frankenstein's bride. The next day, Yurika ends up causing a fire in her dorm room while using aroma candles to fit her character, with Ichigo rushing in to recover her umbrella before Naoto puts out the fire. After the incident, Yurika gives Ichigo and the others her thanks and shows them her normal side, as a regular girl wearing glasses who likes vampires. As the day of the audition comes, Ichigo decides to face against Yurika using her own brand and despite not winning the audition, feels proud of her efforts. 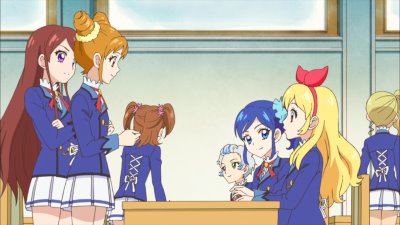