Orihime arranges for Soleil to perform a concert at a local open-air stage in Ichigo's hometown. The catch, however, is that they must fill every seat without using television or the internet, otherwise the event will be called off. The girls jog throughout town, spreading awareness of their concert to the townsfolk, including adults who may not have heard of Soleil. After stopping by Ringo's restaurant, the girls help deliver some groceries to an old lady, who helps spread word of the concert to her elderly friends, who in turn provide more opportunities to promote themselves, building up to a large following. Although there is one seat left remaining, Ichigo manages to plead with Johnny to let the concert go ahead so they don't disappoint their fans. As the girls perform, the concert manages to pull even more fans than they needed, proving to be a complete success. Afterwards, Orihime reveals that Soleil and Tristar will perform together in a summer tour as a combined unit, STAR☆ANIS. 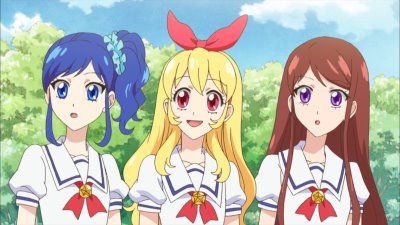