Having become close friends with Otome during the Partner's Cup, Maria becomes keen to learn more about her, wondering how she became how she is. Meanwhile, Otome hears from Makoto that he is designing a Constellation Premium Dress for Happy Rainbow, but is struggling with ideas. Afterwards, Maria comes across Otome at a kindergarten, which is revealed to be Otome's home, and helps her with preparations for a play of The Wizard of Oz. This brings back memories for Otome about a girl named Nagisa who had terrible stage fright. When Nagisa got scared of playing Dorothy, feeling she couldn't be like Otome, Otome confessed to her that she had a fear of heights and had never gone down a slide, and together, they worked to try and overcome their fears. On the day before the play, as Nagisa's stage fright pressured her yet again, Otome pushed herself to reach the top of the slide and came to enjoy them, giving Nagisa the encouragement she needed to perform. As Maria feels happy to learn so much about Otome, Makoto becomes inspired by Otome's playful smile and completes the Constellation Premium Dress. After her performance, Otome is pleasantly surprised to find Makoto had brought Nagisa to see her performance. 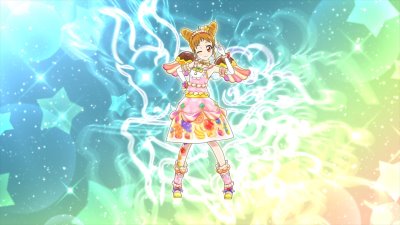