Andrea is outraged when the school refuses to allow students to take part in a health survey that includes questions about sex. She goes before the school board and introduces a proposal to distribute condoms at West Beverly. The Walshes host a heated parents association meeting where Donna debates her mother about the issue. Andrea launches a crusade to create awareness about AIDS and other sexually transmitted diseases. She loses her enthusiasm after Brandon suggests that she shouldn't preach about safe sex because she is a virgin. The school board defeats the motion; the woman casting the tie-breaking vote goes against her conscience out of loyalty to Felice Martin. Kelly eases Andrea's embarrassment about being a virgin by pointing out that having a "reputation" can also bring its share of pain. Andrea decides to go out with John, a newspaper colleague whom she had ignored because of Brandon. Dylan forbids Brenda from writing an article about her pregnancy scare because he considers it an invasion of his privacy. David misreads Donna's stance on the condom issue as a sign that she will sleep with him. She explains that she does not plan to have pre-marital sex. Jackie tells Kelly that she is pregnant. Music: 'I Want You' by Jody Watley, 'The Birds and the Bees' by Jewel Akens. 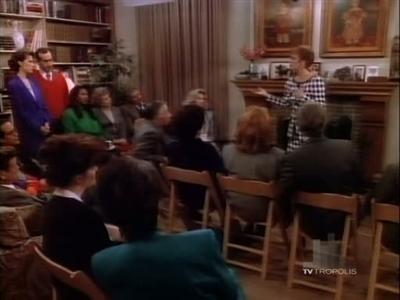