A Song for My Mother

Ray is unhappy that David has come to Portland. David panics when he discovers that his mother was fired, no longer lives at her last known address, and hasn't cashed her alimony checks for months. He turns to Donna for help, and Ray behaves like a total jerk. David and Donna cannot find Sheila at any of her favorite hangouts and learn that she was recently arrested. Donna misses Ray's concert; he explodes and shoves her against a wall in their hotel room. He later feels guilty and loans David his truck. Mel flies in from Los Angeles and tells David that Sheila has a long history of mental illness. They receive a tip that she is living on the streets and take her to the hospital. David realizes that Donna is happy with Ray and decides to back off. Dylan explores hypnotherapy in the hopes of understanding the main character in Charley's script. Valerie gets a tattoo.Music: 'Fever' by Peggy Lee (#8, 1958); 'Why' / 'The Comfort of Strangers' performed by Jamie Walters. 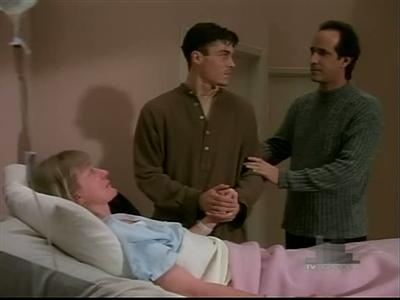