The Beverly Hills Beach Club holds its annual reunion. Steve reminisces about his relationship with Kelly, as he lost his virginity to her on the beach in 9th grade. Clare is disturbed to learn of the couple's history, and comments on the "incestuous" nature of the group. Steve confesses that he spread rumors about Kelly after their break-up, causing her to gain a reputation as a slut. Kelly is hurt, but eventually decides to forgive him. Ryan blows a chance at a date when Austin convinces him to spy on the girl as she undresses. Steve gives the boys a lecture about treating women with respect. David continues to dump all over Donna for quitting the music video business. He harasses her when she talks and dances with another guy, and they decide to break up. Kelly goes to work at an AIDS hospice to complete her summer school credits. Mark Reese, the general manager of the campus television station, recruits Brandon and flirts with Kelly. Valerie finds romance with Kenny, who is married but supposedly separated. Music: 'California Girls' by David Lee Roth, 'Johnny's Noseride', 'Moment of Truth', 'Dawn Patrol', 'Rincon' by The Eliminators 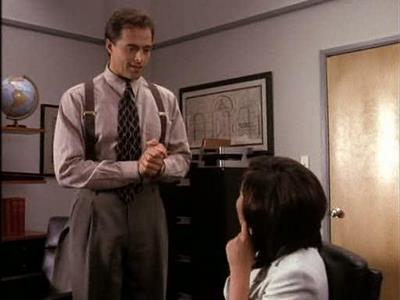