A Mate for Life

Joan's daughter Lily comes to town to serve as maid of honor, and seduces best man Brandon. Nat, Brandon and Steve discover that Lily is an exotic dancer. Nat and Joan's wedding comes to a halt when she goes into labor. She refuses to have the baby until she is a married woman, so they tie the knot in the hospital hallway. Joan gives birth to a son, Frankie. Clare insists that she will never get married, as she couldn't bear to walk down the aisle without her mother. Touched by Joan and Nat's romance, she decides to be more receptive to the idea of marriage. Kelly befriends Jimmy, a hospice resident with an upbeat attitude. David moves into Mark's luxurious home. He tries to get another video contract after being dropped by MZA, and refuses to help Donna film the wedding. Valerie sees Kenny having lunch with his family and suspects that he has lied about his marital status. Music: 'Wedding Bell Blues' by The Fifth Dimension. 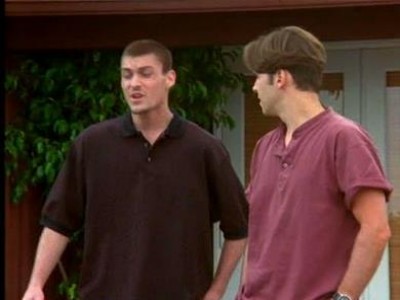