Kelly and David take Jimmy to synagogue to celebrate the Jewish New Year. Jimmy becomes very ill the next day and thanks Kelly for her friendship before dying. Donna gives a shy basketball player a makeover to help her get into the Alpha house. She is accepted, but decides to pledge a sorority that is not so elitist. Donna resigns as rush chairperson to protest the behavior of Alpha president Ellen. Steve leads a group of KEG pledges in a Spirit Day prank; they run through Chancellor Arnold's speech wearing nothing but shaving cream, only to have the sprinklers come on. The dean becomes furious when the incident is replayed on the CU News, as she considers it sexual harassment. Chancellor Arnold, with Mark's cooperation, orders Brandon to turn over the tape so that he can identify the offenders. He reluctantly gives the chancellor the tape, which is mysteriously blank. Tracy reveals that she erased the video with a magnet out of loyalty to Steve and Brandon. Kenny rents a love nest for his liaisons with Valerie, then stands her up for a family outing. Brandon becomes suspicious of the duo's relationship. Music: 'Pick Up the Pieces' by Average White Band. 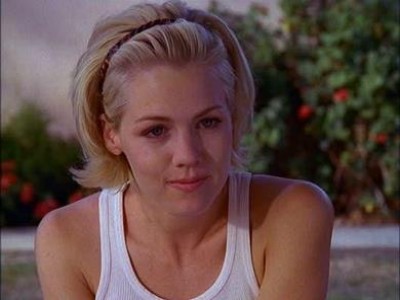