David seeks his father's help in winning over Felice. Mel and Jackie invite David, Donna and her parents over for dinner. Felice makes snide remarks about the pre-prom incident from four years earlier, the fact that Jackie and Mel are not married, and David's mental problems. A furious Donna refuses to come to her parents' house for Christmas. Felice apologizes to David and asks him to arrange a truce. Kelly's father fails to show for dinner, but a young woman arrives in his place. She stuns Kelly by revealing that she is her half-sister, Joy Taylor. Kelly is angry to learn that her mother hid the truth, and she and Joy become friends as they compare notes about their absentee father. Chancellor Arnold immediately hits it off with Samantha at his Christmas party, making Steve and Clare uncomfortable. The gang picks names from a hat to decide who will exchange gifts. Brandon and Tracy struggle with their gift selections, as neither wants to send the wrong message. While shopping for Kelly's present, Valerie gets some help from a kindly woman collecting donations at the mall. Val and Kelly wind up exchanging identical journals. Music: 'Little St. Nick' by the Beach Boys. 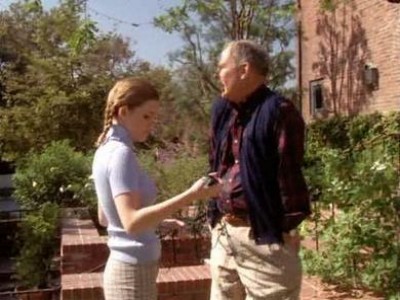