Caroline and the New Neighbor

Things get a little stiff when an demanding elderly new neighbor, who is driving an initially sympathetic Caroline nuts, asks Caroline and Annie for a really big favor - to help out with the removal of her dead, naked husband. Meanwhile, Richard tries to sell his car, but the only bidder is Louis, a bizarre individual claiming to be a minister and promising eternal life in exchange for the vehicle. Charlie, smitten with Sophia, the beautiful new waitress at Remo's, offers Richard $500 (which he makes driving the car as a gypsy cab) so he can give the car to Sophia as a love token; but Richard decides to keep the car and drive it as a cab himself. Through all this, Del is obsessed with the idea that he is losing his hair and his looks. 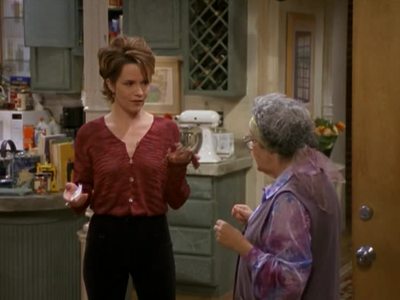