Caroline and the Bad Trip (1)

Caroline and Annie are overjoyed to learn that Caroline's agent has arranged for her to promote her new book on the Jay Leno show; then Annie reminds Caroline that she will need an entertaining story to tell. Enter Richard's mother Natalie, carrying a jacket that belonged to Jerry Garcia and revealing that the dead rocker was Richard's real father. But Richard, hiding in the stairwell until his mother leaves, isn't impressed: there's hardly a celebrity that Natalie hasn't maintained fathered him. While Caroline and Annie fly to Los Angeles, Del tries to teach Richard how to pick up women during Happy Hour at Remo's (Richard: ""I'm not sure I can do that - I mean, be happy for a whole hour.""), and Charlie goes in search of his father, whom an adoption agency locates instantly: a bumbling waiter in a fashionable restaurant who is overjoyed to meet Charlie, even though their reunion gets him fired two weeks before his retirement. While waiting to appear with Leno, Caroline is warned that s 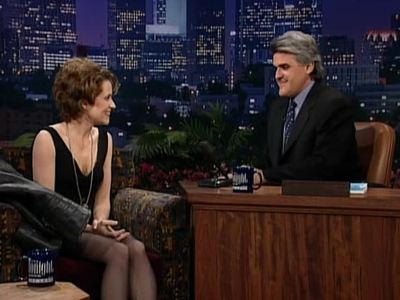