Caroline and the Killer Dad

Annie goes on a blind date with a former priest, and to her own surprise hits it off with him - particularly when she learns he has never been with a woman but would really, really like to be. Richard attempts to reconcile with Julia's multi-millionaire dad, who is still convinced that Richard is only after Julia for the money, and Caroline becomes convinced by a serious of strange accidents that he is actually trying to kill Richard: a theory Richard poo-poos until he finds himself at the controls of a plummeting plane while Mazzone prepares to parachute to safety. Meanwhile, Del thinks he can improve on the punch line of Caroline's latest cartoon, then he and Charlie desperately try to retrieve it from the syndication editors before it goes to press, using measures that give new meaning to the phrase ""cartoon strip."" 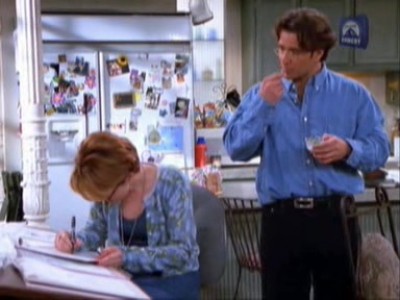